(This library is free but needs your support to sustain its development. There are many desirable features and maintenance ahead If you are an individual using dear imgui, please consider donating via Patreon or PayPal. If your company is using dear imgui, please consider financial support (e.g. sponsoring a few weeks/months of development). I can invoice for technical support, custom development etc. E-mail: omarcornut at gmail.)

Dear ImGui is a bloat-free graphical user interface library for C++. It outputs optimized vertex buffers that you can render anytime in your 3D-pipeline enabled application. It is fast, portable, renderer agnostic and self-contained (no external dependencies).

Dear ImGui is designed to enable fast iterations and to empower programmers to create content creation tools and visualization / debug tools (as opposed to UI for the average end-user). It favors simplicity and productivity toward this goal, and lacks certain features normally found in more high-level libraries.

Dear ImGui is self-contained within a few files that you can easily copy and compile into your application/engine:

Your code passes mouse/keyboard/gamepad inputs and settings to Dear ImGui (see example applications for more details). After Dear ImGui is setup, you can use it from _anywhere_ in your program loop:

Check out the References section if you want to understand the core principles behind the IMGUI paradigm. An IMGUI tries to minimize state duplication, state synchronization and state storage from the user's point of view. It is less error prone (less code and less bugs) than traditional retained-mode interfaces, and lends itself to create dynamic user interfaces.

Dear ImGui outputs vertex buffers and command lists that you can easily render in your application. The number of draw calls and state changes is typically very small. Because it doesn't know or touch graphics state directly, you can call ImGui commands anywhere in your code (e.g. in the middle of a running algorithm, or in the middle of your own rendering process). Refer to the sample applications in the examples/ folder for instructions on how to integrate dear imgui with your existing codebase.

A common misunderstanding is to mistake immediate mode gui for immediate mode rendering, which usually implies hammering your driver/GPU with a bunch of inefficient draw calls and state changes as the gui functions are called. This is NOT what Dear ImGui does. Dear ImGui outputs vertex buffers and a small list of draw calls batches. It never touches your GPU directly. The draw call batches are decently optimal and you can render them later, in your app or even remotely.

Dear ImGui allows you create elaborate tools as well as very short-lived ones. On the extreme side of short-liveness: using the Edit&Continue (hot code reload) feature of modern compilers you can add a few widgets to tweaks variables while your application is running, and remove the code a minute later! Dear ImGui is not just for tweaking values. You can use it to trace a running algorithm by just emitting text commands. You can use it along with your own reflection data to browse your dataset live. You can use it to expose the internals of a subsystem in your engine, to create a logger, an inspection tool, a profiler, a debugger, an entire game making editor/framework, etc.

You should be able to build the examples from sources (tested on Windows/Mac/Linux). If you don't, let me know! If you want to have a quick look at some Dear ImGui features, you can download Windows binaries of the demo app here:

The demo applications are unfortunately not yet DPI aware so expect some blurryness on a 4K screen. For DPI awareness you can load/reload your font at different scale, and scale your Style with style.ScaleAllSizes().

Integrating Dear ImGui within your custom engine is a matter of 1) wiring mouse/keyboard/gamepad inputs 2) uploading one texture to your GPU/render engine 3) providing a render function that can bind textures and render textured triangles. The examples/ folder is populated with applications doing just that. If you are an experienced programmer and at ease with those concepts, it should take you less than an hour to integrate Dear ImGui in your custom engine, but make sure to spend time reading the FAQ, the comments and other documentation!

NB: those third-party bindings may be more or less maintained, more or less close to the original API (as people who create language bindings sometimes haven‘t used the C++ API themselves.. for the good reason that they aren’t C++ users). Dear ImGui was designed with C++ in mind and some of the subtleties may be lost in translation with other languages. If your language supports it, I would suggest replicating the function overloading and default parameters used in the original, else the API may be harder to use. In doubt, please check the original C++ version first!

For other bindings: see this page. Also see wiki for a few other links and ideas. Contact me if you would like to add to those lists. 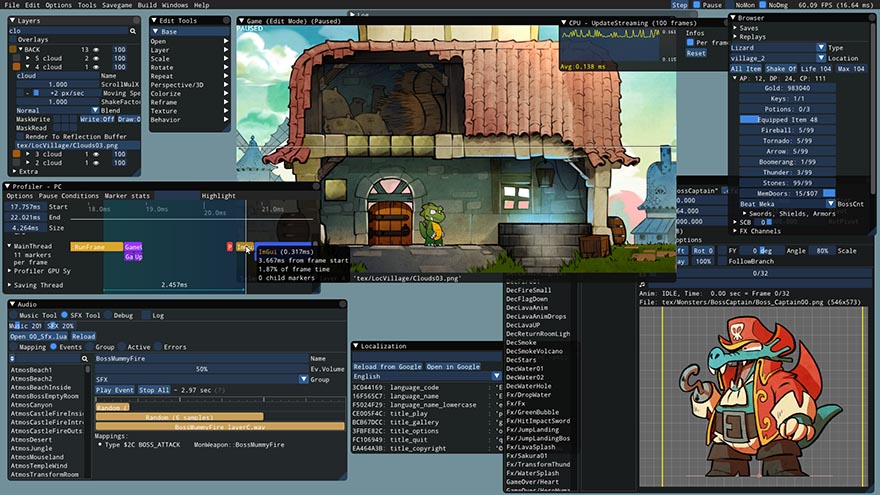 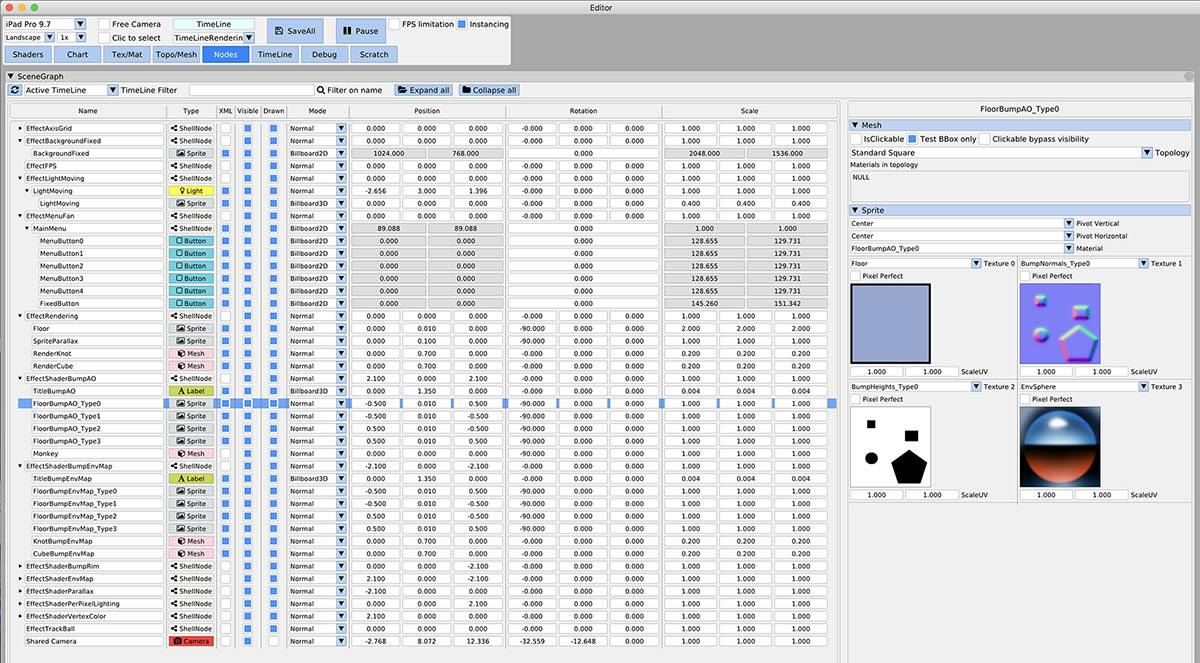 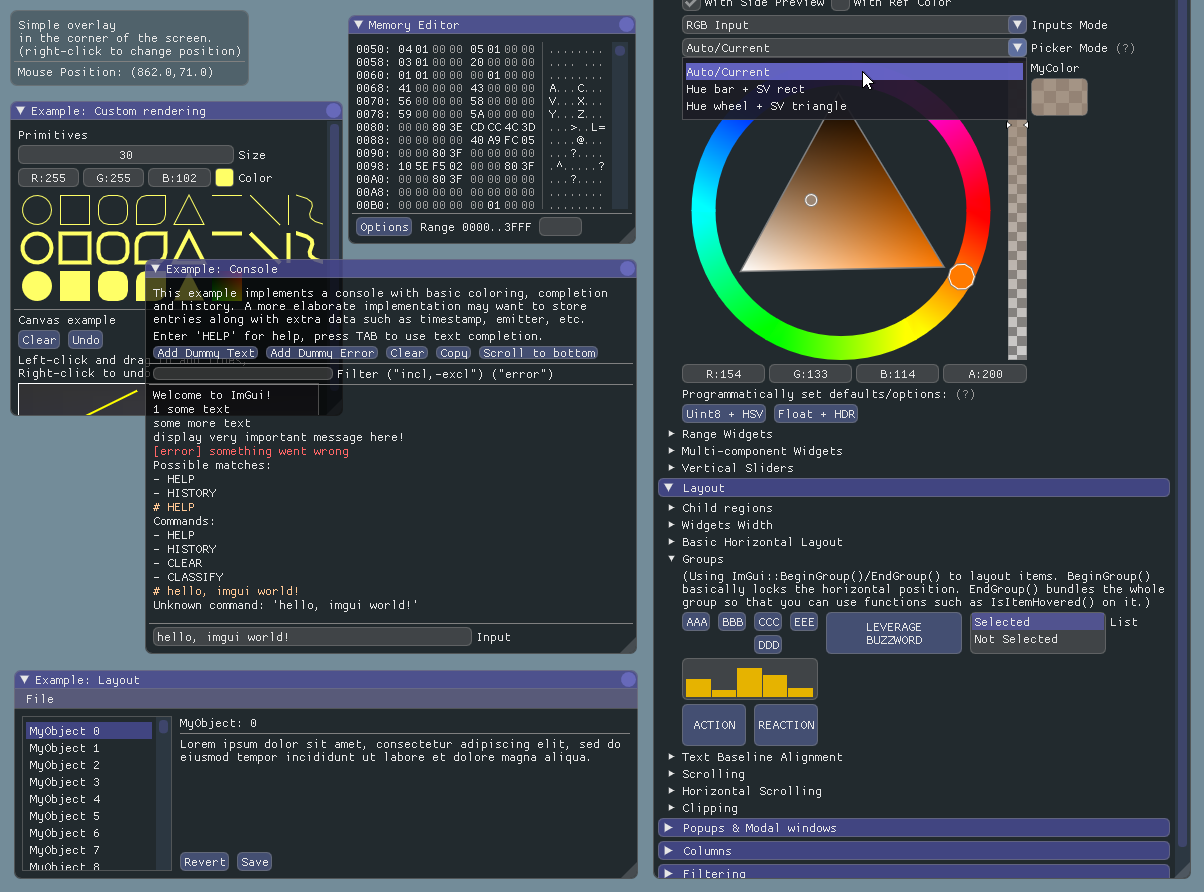 Which version should I get?

I occasionally tag Releases but it is generally safe and recommended to sync to master/latest. The library is fairly stable and regressions tend to be fixed fast when reported.

See the Software using dear imgui page for an (incomplete) list of games/software which are publicly known to use dear imgui. Please add yours if you can!

How can I tell whether to dispatch mouse/keyboard to imgui or to my application?
How can I display an image? What is ImTextureID, how does it works?
How can I have multiple widgets with the same label or without a label? A primer on labels and the ID Stack.
How can I load a different font than the default?
How can I easily use icons in my application?
How can I load multiple fonts?
How can I display and input non-latin characters such as Chinese, Japanese, Korean, Cyrillic?
How can I use the drawing facilities without an Dear ImGui window? (using ImDrawList API)
I integrated Dear ImGui in my engine and the text or lines are blurry..
I integrated Dear ImGui in my engine and some elements are disappearing when I move windows around..
How can I help?

How do you use Dear ImGui on a platform that may not have a mouse or keyboard?

You can control Dear ImGui with a gamepad, see the explanation in imgui.cpp about how to use the navigation feature (short version: map your gamepad inputs into the io.NavInputs[] array and set io.ConfigFlags |= ImGuiConfigFlags_NavEnableGamepad).

You can share your computer mouse seamlessy with your console/tablet/phone using Synergy. This is the prefered solution for developer productivity. In particular, their micro-synergy-client repo there is uSynergy.c sources for a small embeddable that you can use on any platform to connect to your host PC using Synergy 1.x. You may also use a third party solution such as Remote ImGui.

For touch inputs, you can increase the hit box of widgets (via the style.TouchPadding setting) to accommodate a little for the lack of precision of touch inputs, but it is recommended you use a mouse or gamepad to allow optimising for screen real-estate and precision.

Can you create elaborate/serious tools with Dear ImGui?

Yes. People have written game editors, data browsers, debuggers, profilers and all sort of non-trivial tools with the library. In my experience the simplicity of the API is very empowering. Your UI runs close to your live data. Make the tools always-on and everybody in the team will be inclined to create new tools (as opposed to more “offline” UI toolkits where only a fraction of your team effectively creates tools). The list of sponsors below is also an indicator that serious game teams have been using the library.

Dear ImGui is very programmer centric and the immediate-mode GUI paradigm might requires you to readjust some habits before you can realize its full potential. Dear ImGui is about making things that are simple, efficient and powerful.

Can you reskin the look of Dear ImGui?

You can alter the look of the interface to some degree: changing colors, sizes, padding, rounding, fonts. However, as Dear ImGui is designed and optimised to create debug tools, the amount of skinning you can apply is limited. There is only so much you can stray away from the default look and feel of the interface. Below is a screenshot from LumixEngine with custom colors + a docking/tabs extension (both of which you can find in the Issues section and will eventually be merged):

Dear ImGui takes advantage of a few C++ languages features for convenience but nothing anywhere Boost-insanity/quagmire. Dear ImGui does NOT require C++11 so it can be used with most old C++ compilers. Dear ImGui doesn't use any C++ header file. Language-wise, function overloading and default parameters are used to make the API easier to use and code more terse. Doing so I believe the API is sitting on a sweet spot and giving up on those features would make the API more cumbersome. Other features such as namespace, constructors and templates (in the case of the ImVector<> class) are also relied on as a convenience.

There is an reasonably maintained c-api for ImGui by Stephan Dilly designed for binding in other languages. I would suggest using your target language functionalities to try replicating the function overloading and default parameters used in C++ else the API may be harder to use. Also see Links for third-party bindings to other languages.

Your contributions are keeping the library alive. If you are an individual using dear imgui, please consider donating to enable me to spend more time improving the library.

Ongoing dear imgui development is financially supported on Patreon and by private sponsors.